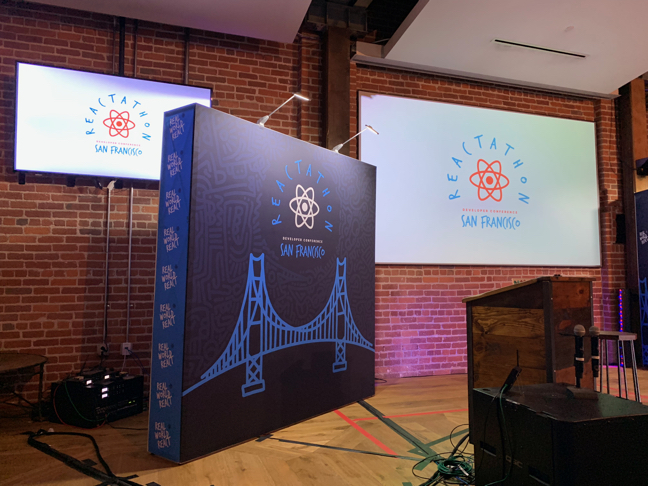 I love conferences - they're an opportunity to network with talented people from an array of different backgrounds, immerse myself in learning about new shiny things and equally, affirm what I already know.

It'll be no surprise to anyone involved in web development in recent years that React is a big deal. It dropped at just the right time between Angular 1 & 2 and subsequently left nearly every other JS framework in its wake - with the exception of Vue bringing up the rear more recently.

I've been working with React on and off for over three years now and I continue to be impressed by it's componentized approach to building out highly complex user interfaces as well as the burgeoning eco-system that has sprung up around it. This blog is built using Gatsby, a static site generator powered by React.

I was attracted to Reactathon by the credibility afforded by its chosen location, Github HQ in down San Francisco, and of course, the stellar line-up of speakers.

Walking around this area of San Francisco was like walking a real-life Monopoly board for geeks. Everywhere I looked I recognised a logo - Medium, Firefox, Google, Facebook, IFTTT - anyone who is anyone is there.

The conference itself was mainly a two-day affair with lightning talks and topic tables on Saturday, followed by a full day of speakers on the Sunday. We were handsomely fed and watered throughout in Github's ground floor communal area. The dining tables were long, bleacher-style affairs which really encouraged interaction with fellow attendees as you couldn't help but either sit next to or opposite someone else. Github also boasts a better-stocked bar than most bars.

The talks were a mixture of non-React-specific topics such as Accessibility and deep dives into different aspects of the React eco-system, such as Redux and Hooks.

As with all conferences, the talks I enjoyed the most were those that related the theory to real-world examples and also those talks which didn't make too many assumptions about what the audience already knows.

I find it frustrating to follow the first ten minutes of a talk only for the assumed knowledge level to hockey-stick upwards. Once you lose a deep-dive technical talk, it's very difficult to catch it again.

A personal highlight was meeting Wes Bos and Scott Tolinski over a fruity IPA - I've taken a number of their respective courses, and I'm a weekly listener to their Syntax podcast - an episode of which was recorded live to finish up the conference.

If I had one big takeaway from the conference, it that React Hooks seems to be game-changer it was hyped to be - Hooks got a lot of love throughout.

This was also my first trip to San Francisco and I loved it - it's as eclectic as I thought it would be and full of things I tend to seek out - good coffee, good beer, avocado toast and shiny things.