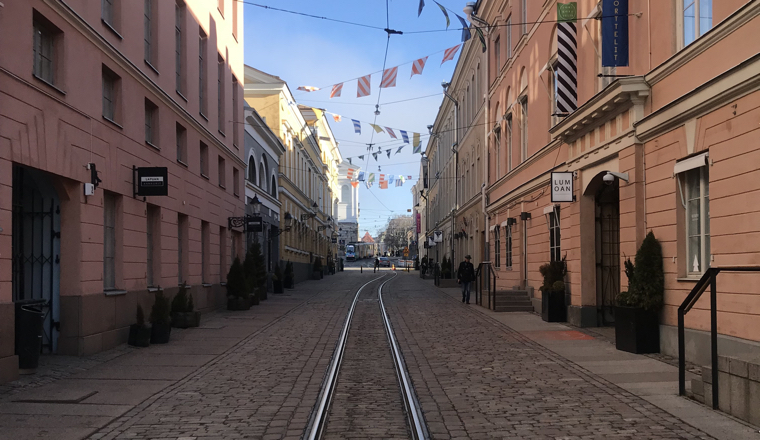 I was attracted to the conference by the single track format and the diverse range of talks scheduled, from the technical aspects of building an application with server-side rendering using Next.js to the more philosophical "How React Changed Everything".

Dual track conferences tend to frustrate me as I always worry I'm missing a better speaker in another room.

The venue was the rather grand Valkoinen Sali in the centre of Helsinki. I arrived early on the first day with a promise that a traditional Finnish breakfast would be on offer and I wasn't disappointed - freshly made smoothies, smoked salmon on rye and lashings of good coffee made for a great start to the first day.

Speaking of the food, the Finns have their lunch at 11.30am which takes a little getting used to and can make the afternoons seem to stretch forever. I previously worked with a remote team based in Oslo and they all disappeared for lunch mid-morning too. 🤷🏻‍♂️

Jani Eväkallio delivered the keynote to kick off day one on the topic of "The New Best Practices". Starting with a brief overview of how React came to be the dominant force in the Javascript world it is today, Jani continued with a reminder that once upon a time, many developers were disgusted at the idea of JSX. Mixing Javascript with HTML was sacrilege, right? Five years later, JSX now has a certain beauty to the trained eye and hell; we're now even putting CSS in our JS. Point being, standards and best practice are fluid and always evolving. Be open to new ideas and techniques.

The rest of the day followed with talks focussing on managing state, differing styling techniques and showcasing new tools. Highlights for me included;

On the second day, I made the mistake of having the hotel breakfast only to have immediate food regret as I arrived at the venue and viewed the spread on offer. 🤦🏻‍♂️

Getting over that, Ken Wheeler kicked off day two with an irreverent and energetic talk on "How React Changed Everything". Ken took us back to a time when Flash sites ruled the web, how Steve Jobs put an end to that and how we got from there to where we are today. It's Ken's view that "React is the perfect abstraction" and it's here to stay for many years yet. However, the next chapter in the React story will focus on making it "faster, smaller and simpler."

Ken also touched on a theme which ran through many of the talks in one way or another which is that we should address the lack of strict type in JS by using Flow, Typescript or some other variation. Ken finished by introducing Reason, a new strictly typed syntax for the OCaml language that is meant to be welcoming to JavaScript developers. Reason has been created by the same person that originally created React, Jordan Walke, so is therefore one to watch.

Other highlights of day two for me included;

After we wrapped up, we were bussed out to a local Aquarium for the official afterparty. It was an interesting choice of venue, but I can't say I was particularly keen on it as it all underground without any natural light - after two days in a curtained theatre, I was ready to see more sky so left early and enjoyed a walk back into Helsinki. The afterparty did include specially brewed conference beer, very cool. 🙌🏻

All attendees were also given a free ticket to the near by Allas Sea Pools, which I was able to squeeze in before my flight home.

All in all, a thoroughly enjoyable conference. Thank you to my employer Canonical who kindly funded my trip.